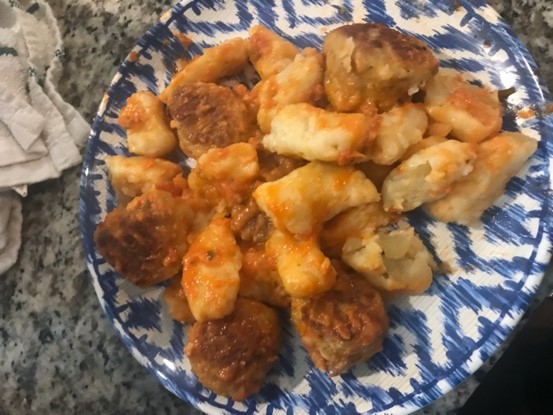 At first, I thought I would try to make some pasta then I remembered I had some potatoes and decided, gnocchi it is!  This recipe does include white flour, as I was unable to obtain whole wheat flour.

My dad’s side of the family is Italian.
No matter what holiday it is, there's always a pasta dish before the main meal and sometimes even meatballs.  Since I was unable to be at home for Easter this year, I went with some homemade gnocchi and chicken meatballs for my main course. At home we would have this as a first course, followed by the main dish of probably ham with mashed potatoes and brussels, something along those lines.  Man, can we eat!

I followed a recipe that I found on Pinterest which called for 2 potatoes, 2 cups of all-purpose flour, and 1 egg- all things I had on hand, score!
The first step was to boil the potatoes for about 20 minutes.  Next was to peel and mash them. This step was very challenging as I only had a fork, and I think I should have left the potatoes to boil a little longer. Once I had the potatoes as mashed as I could get them I realized I have a food processor so I threw them in there and gave it a whirl.  Next was to mix the flour and egg with the potatoes. Personally I think the recipe called for too much flour, 1 cup probably would have been fine. So, next time I will try it with 1 cup and add as needed. Anyways, once this was all mixed the fun began!
Time to roll the dough into a snake like log and cut roughly 1" little pieces off! I boiled some for about 5 minutes and stuck the rest in the fridge to have during the week. Before this process I mixed together ingredients for chicken meatballs (Sorry! Grandma’s recipe, cant share this one).
Once all was said and done, I had gnocchi with meatballs and some tomato basil sauce from trader joe’s.

I sent pictures to my family on the East coast, which I now slightly regret because they all requested that I cook more next time I am visiting home. I wish I could have been with my family today but I sure did keep busy in the kitchen! 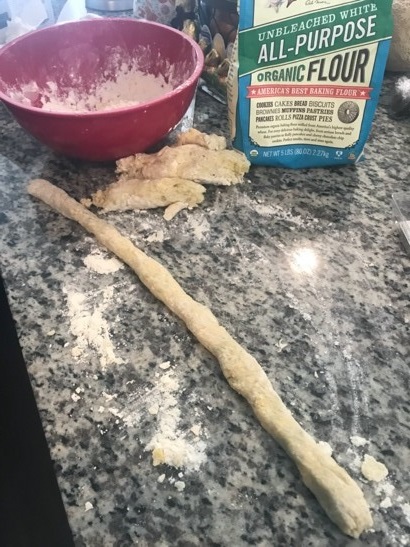 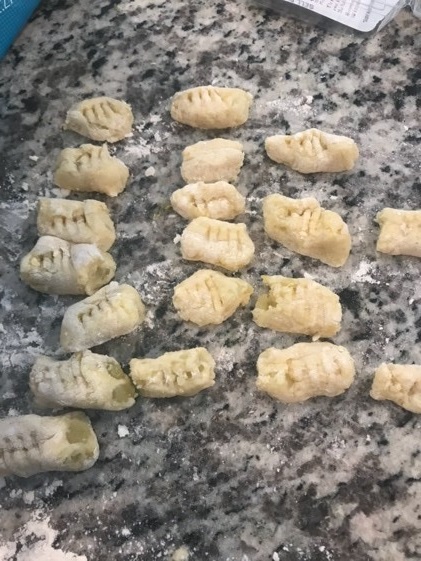 1.) Bring water to boil in a large pot add salt as needed
2.) Clean potatoes and add to boiling water
3.) Boil for 20 minutes or more until tender
4.) Once tender remove potatoes from water, save some potato water as needed
5.) Peel and mash potatoes either with fork, potato masher, or food processor
6.) Mix potato, flour and egg mixture in large bowl
7.) Once mixed roll mixture into a roughly 1" thick gnocchi rope
8.) Cut rope into 1-1 1/2" long pieces
9.) You may fork them as needed to create patterns
10.) Boil desired amount in new water.
11.) Remove from water once they begin to float
12.) Add other ingredients as needed and enjoy!